‘… where the road forks, bear left over the bridge and stream. Go past the church. The gates to the Hall, with the lodge house, are next to it. The Lime avenue leads to the Hall. Park outside.’

Brent Eleigh Hall has a history. It is history, situated on the banks of the River Brett near to Lavenham in Suffolk, which is itself in a time warp. The Hall was once the seat of the Shelton family, and since then of Sir Felix Agar in the 19th C.
More recently it was home to Sir David Barran, former Chairman of Shell. It has recently been acquired by the current owners who are in the process of renovating it. Of particular interest to me is that it has a huge Victorian walled kitchen garden consisting of nearly two acres.

I pulled up next to three other parked cars. A sign on the front door steered me to the walled garden… great! Off I trotted following the red brick wall to a gate where I was able to see one of the gardeners, Adrian, busy at work. The walled garden is unusual, having a valley with beds rising up on either side to the West and East walls, which are of different heights. I was told that this was to maximise the light as the East wall is taller. The cold air rolls down the valley and out through the gate in the centre of the North wall.

Soon myself and five other WFGA members were introduced to Merriel Gardiner, the Head Gardener, who has recently been appointed. We were given a tour of the garden on our way to the orchard. Glass houses on the south wall contain peaches and a vine. The garden has been freshly dug awaiting more fruit, vegetables and edible flowering plants. Micro-herbs are also grown. These have become popular, used as a garnish or small salad accompaniment and are literally herb and vegetable seedlings picked for intensity of flavour. The garden and its produce are important to the owners as they supply Novikov Restaurant in Mayfair.

The Hall is impressive. I was to learn that it is believed to have stood on an Elizabethan E plan footprint even though it now looks Georgian. Alterations have been made to the entrance hall and dining room by Sir Edwin Lutyens in 1933-34. I was told that he also designed the flamboyant pig house in the kitchen
garden but this was probably a joke, although it must be the most glamorous pig-house in England!

On a guided tour of the gardens I wonder about the jewel of a bothy at the foot of the walled garden which used to sleep the gardeners who were on duty and has a tiny chapel. At the back of the house I see projecting out onto the garden two large wings supporting a grand Tuscan portico. The huge pillars are mimicked by two soaring magnolia grandiflora.

The nearby orchard was planted in the early 1980’s with apple varieties Worcester Pearmain, Egremont Russet, Ashmead’s Kernel and Cox’s Orange Pippin. There is also a row of heavy cropping Concorde pear trees. Adrian talked us through the pruning technique for these non-tip-bearing trees, shortening new growth to around three or four buds, aiming to create an open goblet shape, taking off dead or diseased wood and allowing good air flow. With sharpened tools we set off, inspired to make good progress. The trees had put on a fair bit of growth and so we climbed ladders to reach the higher branches and keep them in check, the top growth reaching about five metres. By the late afternoon we congratulated ourselves on a neat-looking orchard, with a stack of apple wood prunings heaped and ready for the fire.

Now to tackle the lonely Egremont Russet at the back of my garden. Clients …watch out!

See http://novikovrestaurant.co.uk/brenteleigh/about-us/ for interesting information and photographs of the garden as well as news from Merriel 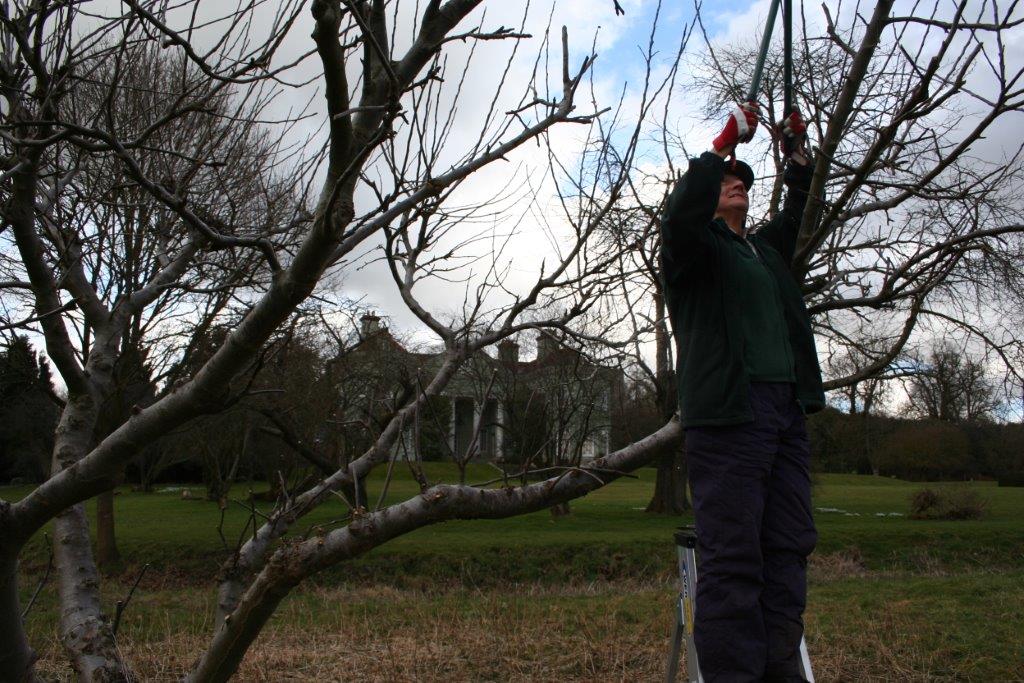 Pruning in the Orchard

A Report from member Izi Glover

Warden Abbey vineyard is a community enterprise entirely maintained by volunteers and managed by our workshop host, Jane Markham. The four acre ‘Lyttel Vineyard’ was originally planted in the twelfth century by Cistercian monks of Warden Abbey. The Whitbread family, local to the area, replanted the vineyard in 1986, and their award winning production was taken over by the current community project, who replanted some of the white grape vines. On average, four to six thousand bottles of award winning wine are produced annually. Their vintages include ‘The Reformer 2013,’ a blend of Bacchus and Reichensteiner grapes and ‘The Founder 2013,’ a blend of Muller Thurgau and Regner grapes.

In the morning, Jane shared her viticultural expertise and provided a detailed introduction to the annual cycle of vine cultivation and pruning. We gained fascinating insights into the complex world of wine production – from how the timing of pruning affects sugar levels in the grape (early pruning in January/February promotes higher sugar levels in the grape), to the crucial balance between leaf and grape (fourteen leaves above a bunch, one and a half leaves either side of the vine), and even why prunings are weighed in commercial vineyards (to monitor vine growth). We learned the scientific reasoning behind pruning methods, including nurturing a bud’s development and the best choice of healthy fruiting canes.

I would highly recommend this workshop to fellow members next year – when I mentioned it to friends and garden owners, I had numerous requests for vine pruning. Moreover, beyond its practical merits, Jane’s shared knowledge of wine production was thought provoking in many ways. You come away with a terrific quiz question too!